A brief history about who I am first… I don’t come from a technological background. My mom works in HR and my dad is an occupational therapist. Computers and gadgets weren’t a commonplace item in my house growing up. We still had a computer growing up and I fondly remember the dial up days, but it was never introduced to me as something more than a machine that’ll run Backyard Baseball. If it worked it was ok in my book. I spent most of my days drawing as a kid. Reading wasn’t up my alley, so you can imagine when the summer came around and I had to do summer reading I only had feelings of excitement. I was passionate about art and wanted to be an artist one day (circa 2000).

Fast forward to 2014 and I’m currently sitting in a lab on the Princeton campus writing this blog post. Now people who know me might think “Princeton? Since when did you want to go for your Masters or PhD?” and people who know me well might be thinking “Princeton? There’s no way you got in there. What’re you doing there?” So to the people who know me well and asked yourself the latter question, bravo. I wasn’t much of a student. I’d study for tests at the last minute, I’d purposefully skip homework assignments and I was on my computer all of the time. I must’ve been slacking off. Now, what was I actually doing? Well, I was working on projects. I was creating my website or working on a web app. I was wondering why this stupid app would crash or just wouldn’t compile. Like, what the hell is a SIGABRT and why do you show me a bunch of assembly code? It doesn’t help! All those times I did poorly on a test or didn’t pass my homework in were probably a result of countless frustrations and desires to throw my computer out a window. Then I’d realize I’d have a test the next day (or in an hour) and cram half the text book into my head that was only thinking, “Why the hell am I getting a 400 error!”. I wasn’t made for school and I wholeheartedly accept that fact. Princeton is just where I happen to be when writing this post.

So what about being the dumbest person in the room? You still haven’t touched on why you wrote this post in the first place… Well, in a sense I have. I touched on my life as a student briefly, and that’s where this thought came to mind. As I mentioned, I wasn’t much of a student and to add to it all I wasn’t much of a test taker either. Even my Computer Science tests weren’t great. The highest grade I received in a Computer Science class was an A- and I only got one of those (the intro class). So now you might be thinking “Ok… but tests and grades don’t necessarily measure someone’s intellect.” which is great! Keep thinking that way! If you aren’t thinking that then I’d love to talk to you about how grades don’t matter and how society has put this pressure on students to strive for the grade rather than the knowledge. But I digress… I was surrounded by a bunch of smart people during my undergrad career. People who knew way more than I did about Computer Science and programming. It seemed like everything I tried to do they could do two times faster and ten times better. It was a little degrading because I’d usually put in five times more effort it seemed like. To them, it clicked and to me it didn’t. There were countless times where I’d be having a discussion with someone about a topic and I would be completely lost. More lost than Spongebob and Squidward when they were delivering pizza here: 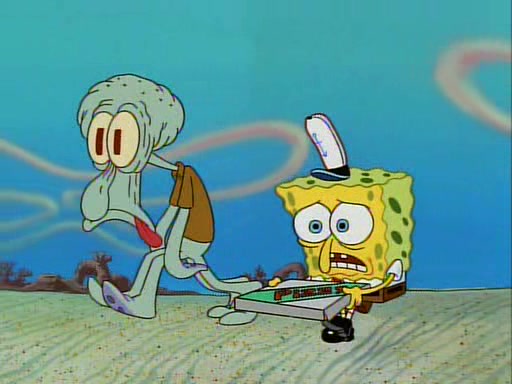 By the way… this episode came out 13 years ago.

I felt pretty defeated. I would finally get something only to find out someone else knew that exact same thing or solved that same problem ages ago. So what did I do? I went off on my own to try and learn as much as I could and make a grand reentrance. What a terrible idea. So terrible that I sort of regret it. Less now, but at the time I regretted it a lot. Now this is where the title comes in to play. I should have valued being that person who didn’t know as much. Being the dumbest person in the room isn’t bad… it’s actually really really good. Wait… what the fuck? You’re kidding, right? How can being the dumbest person in the room be a good thing? The answer to that is really simple, but because this is a blog post I’m going to break into narrative and talk about my internship at Raizlabs. If you’d rather not read all of that you can skip to the conclusion under the header TL;DR.

To sum up my experience there it was nothing less than the most amazing opportunity I’ve ever taken. I’m so happy I took the opportunity with Raizlabs over a full time position. I walked in my first day excited and pumped for what I’d be doing. I loved the office and the people. I loved working in a place where OS X was the preferred and only operating system used by developers. I’m no Windows hater I just don’t like it for developing (or anything I do for that matter…). Then I was thrown a little bit of a curve ball. It was mostly self generated because I had gone in thinking I’d be working on the web team (as for why I don’t really know). But I get in and I was greeted by the person who’d be helping me out during the summer, Nick. He was a Senior iOS developer and he told me I’d be working on a library (which will be later released as a Cocoapod). You can check the library out here. The only iOS experience I had coming in was the semester I spent working on an app called CowDuck (which was an all-in-one Wheaton app). That was my Junior year, so it had been over a year since I had even opened XCode let alone write Objective-C. I was nervous… but I was confident in my abilities. If you had put me in that situation even a year before I would’ve freaked out and had a strong desire to quit. But I relearned stuff and went from 0 to 60 in record timing in my eyes. I learned a lot in the time it took me to get back in the iOS groove, but I didn’t actually learn anything until I started getting feedback from Nick. I’d say I learned more talking with him about design patterns and from code reviews in the first month than I had learned in all of my previous experiences as a developer in an industry setting put together. And the amount I learned about developing iPhone and iPad applications and about iOS itself extends far beyond what a how-to book on app development could teach me. I really valued not knowing anything. Talking with him and the other developers really opened my eyes to a completely different world of development. There’s just so much that I don’t know that I want to know. There are things that would take me hours to figure out but would take them minutes. I want to get to that point someday and I know I will. But I had to be the dumbest person in the room first. You have to start somewhere and no matter when you start, everyone starts off in the same spot. Not knowing anything. So…

It’s good to be the dumbest person in the room because you LEARN the most! And I don’t mean like read a text book learn. I mean grasp and deeply understand a concept so much so that you could teach someone else that exact same concept in your own words and they would understand it just as well as you do. If you ever feel defeated or feel like you’re lagging behind, don’t be discouraged! Take that as an opportunity to ask questions and learn from your peers. Embrace the stupidity you may feel and turn that into a feeling of opportunity to learn something new. There really aren’t any stupid questions. No one can blame you for not knowing something because, like I said, everyone started at the same place. Knowing nothing. So never stop following your passion and learning because, one day, you will turn into the smartest person in the room.